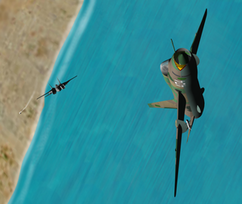 The Gulf of Sidra incident took place of the Libyan coast on August 19, 1981. It was a naval interaction where two Libyan Sukhoi Fitter attack aircrafts were shot down by two American F-14 Tomcats. At this point in time Ronald Reagan was the US's president and Omar Kadafi was in charge of Lybia.
Libya had previously claimed 12 miles of its waters in the Gulf of Sidra. This caused US naval forces to conduct Freedom of Navigation in the area. This operation intensified when Ronald Reagan was elected.  In August he deployed a large naval force off the coast of Libya. The Libyan Air Force reacted by deploying a large amount of interceptors and fighter bombers. Early in the morning three MIG-25 Fox-bats approached the US carriers but were driven away. The Libyans then attempted to find the exact location of the US naval force by flying in thirty-five pairs of MIG-23 Floggers, MIG-25's, Sukhoi Su-20 Fitter- C's, Su-22M Fitter J's and Mirage F1s but were intercepted by seven of the US's F-14s. Neither side ended up firing or attacking.
On August 19th two F-14 fighters were flying to cover a missile exercise. The pilots were told to intercept two Soviet built Su-22 Fitters aircraft. One a few seconds before they were about to intercept one of the Libyan fighters fired a missile at one of F-14s but missed. The American pilots fired at the Libyan aircrafts and successfully shot down two. Less than an hour later the Libyans conducted a search and rescue operation to find the missing flyers. Two MIG-25s entered the scene and went towards the US carriers and preformed a mock attack. Three F-14's headed in the direction of the Libyans but they turned around and went home along with the other planes.
Powered by